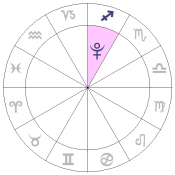 Pluto will be in the sign of Sagittarius between the years of 1995 and 2008 Pluto takes about 248 years to make a full transit of the Astrological signs. Its time to pass through the signs can vary from between 12 and 32 years as it has an unusual orbit. It is considered a transpersonal planet and as such the interpretation of its movement through the signs applies to a whole generation of people and not specifically an individual. Looking at the house position that your Pluto is in will give you more detailed information on how it applies to you. For the sign that Pluto passes through there is often great upheaval and suffering, resulting in major and long lasting changes. Sagittarius is the sign that rules over the areas of religion and codified systems of thought that been developed over many years. These includes areas such as the law, philosophy and higher education. When Pluto passed through Sagittarius the conflict of the cold war that had dominated thought since after World War two shifted dramatically to a renewed conflict between the religions of East and West. No more dramatic moment could highlight this shift than the attack on the twin towers. The world conflict was now one of Religion and not political ideology. The current conflict and wars in Afghanistan and Iraq have yielded only tragic loss and sadness. However where Pluto passes through, for all the suffering that has to be endured, there is always long lasting change, profound lessons and ultimately advancement for mankind. Hopefully the major religions will again understand and tolerate each others differences and a better age will follow.