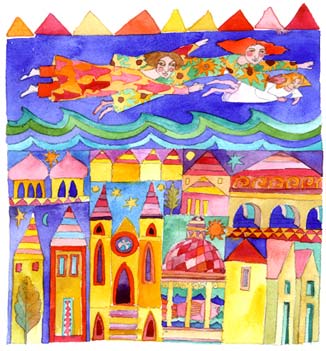 "'Now, now, you stars that move in your right spheres. Where be your powers ?"
Shakespeare, King John

The Houses are the areas of life in which the energy of the planets and their signs are projected, as on to a screen, to manifest in our lives.

There are twelve houses in all, thus paralleling the Twelve Zodiac signs. Each of the Houses corresponds naturally to one of the signs.

The journey around the Houses is a journey from beginnings to endings.

At the beginning of the First House is the Ascendant, at which time something emerges, this could be anything from an idea to a person. This then travels around the houses gaining experience and momentum until it returns to it's original position, it's energy waning ready for something new to emerge. Truly it the journey of a human being from birth to death incorporating all the many wonderful and tragic experiences along the way.

William Blake wrote the poem From Innocence to Experience. This is the human journey of a child being born, having his life experiences and returning back to where he came from, but no longer with innocence but with all the experience he has reaped along the way. 'We shall not cease from exploration and the end of all our exploring will be to arrive where we started and know the place for the first time.' Little Gidding, T.S.Elliot. This is the journey we all know and have to take. It is the Call to Adventure, the Journey and the Return with all the gifts we bring home.

In the 'Lord of The Rings' the classic tale of the hero, the book starts with the innocence of the Shire and it ends with our adventurers coming back home to the Shire but now as different people with all the experiences and adventures and memories they earnt along the way. This is the human journey and truly it is shown by the trip around the Astrological Houses.

The Ascendant and the First House is the emergence of something seemingly from nothing. It could be the birth of a baby, with all the hope and dreams and innocence that come with it.

These first Five Houses are very much me centred. Someone cannot give of themselves until they are established in themselves and know what it is they can do.

In the Sixth House the focus of a person turns outwards to serving the community in which they find themselves in, or at the very least towards making a living to get by.

The point opposite the Ascendant is known as the Descendant and here is where our person encounters the other. This is the time where feedback is given from the outside world. The Focus of the Seventh House is about relationships.

In the Eighth House there is transformation through a deep encounter with some one else and their values.

In the Ninth House the person puts all that he has learned so far into a greater context and searches for an overall meaning to what he has experienced.

In the Tenth House the person stands out in the Public Arena often through their career.

In the Eleventh House he becomes involved with groups and friends and shares ideals and visions.

Finally in the Twelfth House he withdraws ready for the twilight of his life, yet with all his memories and achievements.

By looking at which Houses the planets lie in we can see which areas will be the focus of the individuals life. This is not to say that nothing will happen if there are no planets in a house, it's just these areas are less emphasised. The houses say where the energy forces represented by a planet will manifest in ones life. For example with a person having mars in the fourth house. Here a persons strength, as represented by the placement of Mars, will manifest predominantly in the area of life of The Home, as represented by the Fourth House.