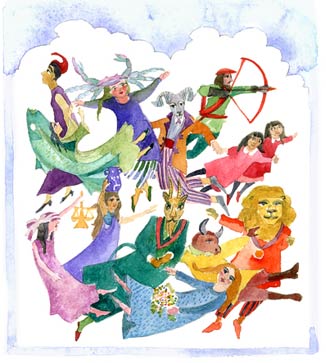 "What shall we do else?
Were we not born under Taurus?"
Shakespeare, Twelfth Night

As the planets move in the sky from the point of view of the Earth they appear to move along a similar path passing in front of a number of stars.

The stars have been divided into twelve separate equally sized constellations. These are the traditional Astrological signs we have come to know.

Why twelve you may ask ? Twelve is a number of completeness in the physical world. The Moon makes approximately twelve cycles around the Earth for for one Earth cycle around the sun, hence we have the twelve months of the year. Also in the Bible we have the twelve tribes of Israel who represent all the different types of people who can make up a nation. Infact the number 12 is made up of four lots of three. These are the four elements of matter and the three modes of spirit.

Traditionally the world of matter was thought to only contain four basic elements, Fire, Air, Earth and Water. Everything was deemed to be made up of one of these elements. Man would look at nature and see the different elements. He would look up at the sky and see the Sun or witness a forest burning, from this he discerned the element of fire. He would feel the wind on his face and understand the element of air. He would look at a lake or a river or at the rain and see the element of water. He would feel all the physical things such as the trees and soil and plants and would see in them the element of earth. He knew instinctively he needed all these elements to survive. Fire for warmth , Air to breathe, Water to drink and Earth for food. Astrology says that also on another level, a psychological level, we have all these elements inside each of us, and that they make up our individual nature. We can get a hint of this with the words we commonly use to describe people: 'She's a fiery girl' , 'He's a bit wet' , 'She's a very grounded woman' , 'He's a bit of an air head'.

Astrologically each of the 12 signs corresponds to one of the four elements. There are therefore three of each element type. The fire signs are Aries, Leo and Sagittarius.

A fire sign will give a fiery nature to it's recipient. They will be inspired, have lots of energy and generally there will be a warmth and a passion and a zest for life about them. They will want to get on and do things. They may be quick to lose their temper.

The Air signs are Gemini, Libra and Aquarius. An air sign will endow it's recipient with a nature focused on the level of the mind and intellect. To them ideas are important, concepts and logical reasoning. They will be the architects and designers who can conceptualize ideas before they are manifest. Air is the element we use when we speak in order to communicate with each other.

The Water signs are Cancer, Scorpio and Pisces. They will endow their recipients with an emotional nature. These people will relate to others on the level of feeling. They will be more instinctive than rational. Their nature will be more feminine in it's expression. Water is shown when we cry and express emotions.

The earth signs are Taurus, Virgo and Capricorn. The nature of people born under these signs will be more focused on the practicalities of manifesting things in the physical world. They will relate to what they can see and touch. They will be more likely to have their feet on the ground and to live in the present moment.

As well as the four elements of matter we have the three modes these elements can express themselves in. In every event there is a beginning, a middle and an ending. With the beginning there is lots of movement as an idea comes into being. In Astrology this is known as the Cardinal Mode.

The middle of an event is when an idea has become established and is at the height of it's powers. This is known as the Fixed Mode.

Finally an event begins to fade and transform ready for something else to replace it. This is known as Mutable Mode.

We can see this in a business being formed (Cardinal), being at it's height over a number of years (Fixed), to having to transform or end as the business is no longer required (Mutable). We can also see this in the seasons. They each have an onset , a height and a fading away.

Lets take Summer in the Western world. We have the beginning around July, the height around August and the fading away around September. In Astrology this corresponds to Cancer, Leo and Virgo. Cancer is a Cardinal Sign, Leo is a Fixed Sign and Virgo a Mutable one. As with the elements the modes of a sign endow their recipients with that nature.

Have you ever met someone brimming with new ideas? This is an attribute of a Cardinal Sign.

Have you met someone so stubborn you could never change their opinion ? This is an attribute of a Fixed Sign.

What about someone who is so flexible they agree with what everyone says. This is an attribute of a Mutable Sign.

Each of the signs have been blessed with specific gifts and issues that are unique to them. We as humans who were born with planets in those signs are given these same attributes in our personalities.

As we travel around the Zodiac we see each element (fire, air, earth and water) progress through it's three modes (Cardinal, Fixed, Mutable) to a gradual unfolding expression of it's nature.

To find out how these signs affect you: