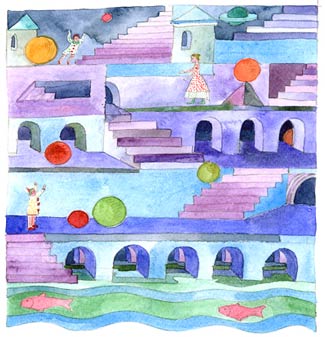 "I must be patient till the heavens look
with an aspect more favourable"
Shakespeare, The Winters Tale

At the time of someone's birth all of the planets are in particular positions in the sky. Two planets, relative to each other, may be in the same Zodiac sign or an opposite sign or a few signs away. The combinations are endless and are unique with each passing moment. Certain of these combinations are deemed as a relationship between planets.

We can see a similar thing in daily life. Let's imagine a playground where lots of children are playing and talking. At first glance this may appear as a completely random scene but on closer inspection there is far more order present. Some children may be standing together in one part of the playground chatting. They are sharing a common experience or conversation. In Astrology this is like some planets being together in one part of the sky and is known as a Conjunction. In another part of the playground some children may be playing a game of soccer. There are two teams playing against each other. In Astrology this is like an Opposition. Two planets are facing each other in some kind of dialogue. They are coming from different points of view but are connected and essential for each other, as in the soccer game. Each Planet, as we have mentioned before, represents a different universal energy. This same energy exists in the individual within his psyche. Therefore if planets are in relationship in the sky above at the time of a persons birth, so they will in the same way, be in relationship within the individual and his psyche. There are many planetary combinations but to understand their essential nature we have to turn towards number symbolism.