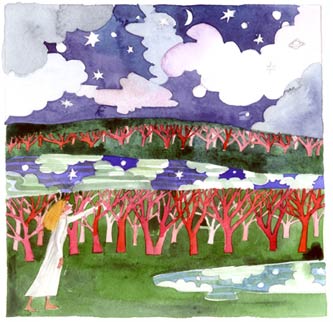 "Saturn and Venus this year in conjuntion !
What says the almanac to that ?"
Shakespeare, Henry IV

Up until fairly modern times there were only ever considered to be seven planetary bodies in the sky apart from the earth.

These were The Sun, The Moon, Mercury, Venus, Mars, Jupiter and Saturn. These seven bodies can all be made out with the naked eye at the appropriate time of the year.

The number seven is therefore considered a number of completeness within the material world. As well as the seven planets we have:

Infact our own days of the week are named after each of these seven planetary bodies. The French translation is given in brackets where it's not obvious in English.

Saturn was always considered the edge of the solar system, it's rings representing a barrier that could not be passed. However in 1781 Uranus was unexpectedly discovered through a telescope , followed later in 1846 by Neptune and in 1930 by Pluto. There are now ten planetary bodies , as well as the more recently discovered planetoids such as Chiron accepted now by many of the more modern astrologers.

According to astrology each of the planets is not there by coincidence but as part of some greater universal order. As such they each represent a principle of the universe which is also to be found in a similar way within the attributes of the individual human being. A persons strength, their capacity to love, to need etc.

To find out how these planets affect you: