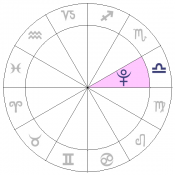 Pluto was last in the sign of Libra between the years of 1972 and 1984. Pluto takes about 248 years to make a full transit of the Astrological signs. Its time to pass through the signs can vary from between 12 and 32 years as it has an unusual orbit. It is considered a transpersonal planet and as such the interpretation of its movement through the signs applies to a whole generation of people and not specifically an individual. Looking at the house position that your Pluto is in will give you more detailed information on how it applies to you. The sign of Libra deals with relationships both on a personal and a global scale and whether justice is being done in these relationships. Pluto in the sign of Libra suggests that you belong to a generation concerned with global justice and transforming human relations. During the transit of Pluto through Libra this generation will have to seek justice and fairness in these areas or have it forced upon them through violence and struggle. These years saw the ending of the Vietnam war and the rise of protest movements against America getting involved in foreign conflicts. The end of this transit saw a popular worldwide movement in support of alleviating famine in Africa, possibly a first of it’s kind.