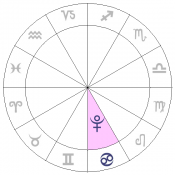 Pluto was last in the sign of Cancer between the years of 1914 and 1939. Pluto takes about 248 years to make a full transit of the Astrological signs. Its time to pass through the signs can vary from between 12 and 32 years as it has an unusual orbit. It is considered a transpersonal planet and as such the interpretation of its movement through the signs applies to a whole generation of people and not specifically an individual. Looking at the house position that your Pluto is in will give you more detailed information on how it applies to you. It is significant that the last Pluto transit through Cancer took place exactly between the beginning of the first and the beginning of the second world war. The sign of Cancer rules over the area of the home and family. This was a time when there was great upheaval and change for the family. During the first world war a whole generation of youth was lost and families forever changed. The defending of the home and national way of life exacted a great toil upon society. Specifically the role of women changed as they were forced to take on the duties of many men who were at the front and it led to a new acceptance of what they were capable of. The family was further forced to endure the tough years of depression and suffering of the early 1930’s following the stock market crash. Optimism and change for the better only came towards the end of this transit with the ideas of Relief and Recovery promoted by the New Deal. Overall this is a generation that has its security challenged and as a result are forced to adapt to new social concepts.