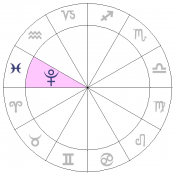 Pluto will be in the sign of Pisces between the years of 2043 and 2067. Pluto takes about 248 years to make a full transit of the Astrological signs. Its time to pass through the signs can vary from between 12 and 32 years as it has an unusual orbit. It is considered a transpersonal planet and as such the interpretation of its movement through the signs applies to a whole generation of people and not specifically an individual. Looking at the house position that your Pluto is in will give you more detailed information on how it applies to you. When Pluto is in Pisces there will be great advances and transformations in the spheres of Art and Culture. The last generation of Pluto in Pisces was between the years of 1799 and 1823. This was a period of great flowering in the Arts. Poets such as Byron, Shelley and Keats, the later romantics, flowered in Britain. This romantic movement simultaneously took place in music with such composers as Beethoven and painters such as Constable. When Pluto re enters Pisces, this will be a generation that is capable of healing on a planetary level. Spiritual leaders will be born who can influence mankind towards tolerance of others and acceptance of cultural differences. It is possible these leaders will arise as a response to increasing intolerance and wars between nations.