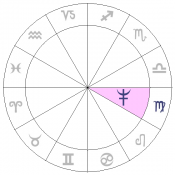 The planet Neptune was in the sign of Virgo from 1928 to 1943. It's important to note that Neptune takes about 164 years to make a complete cycle, spending about thirteen years in each sign, and therefore the interpretation applies to a generation rather than the individual. For a more individual interpretation you need to look at the house position of Neptune in your chart. The chaos and suffering that was to result from the Wall Street crash of 1929 were fully unleashed during this period. The roaring twenties and the undue optimism they brought were rapidly brought to an end as the decade came to a close. The sign of Virgo looks after the area of day to day life and specifically the area of employment. During this time Neptune brought chaos and uncertainty and disillusionment in this area for millions of Americans, as unemployment became rife following the failure of companies during the crash and the resulting cutbacks that ensued. Neptune is considered in detriment in the sign of Virgo as it is opposite the sign of its natural rulership, Pisces. The grand vision of Neptune is not easily at home with the day to day impracticalities and details ruled by Virgo. Like all Neptune transits though there was a purpose and reason for its transit through Virgo. The government was forced to consider the suffering of ordinary good people and to do something about it. There were controls put in place against undue speculation, as seen in the early 1920's, in order to ensure this would not happen again. The early attitude that the poor should help themselves was changed in 1932 when Roosevelt came to power. He advocated a New Deal which brought new laws that would bring relief to the poor and hope for a better future, raising the minimum wage and limiting the maximum hours people could work. The generation born with Neptune in Virgo will therefore experience great changes and suffering in the areas of employment and through the upheaval they go through will find better and fairer ways and laws for the future.