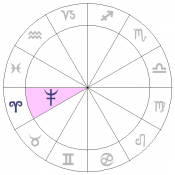 The planet Neptune was in the sign of Aries from 1861 to 1875. It's important to note that Neptune takes about 164 years to make a complete cycle, spending about thirteen years in each sign, and therefore the interpretation applies to a generation rather than the individual. For a more individual interpretation you need to look at the house position of Neptune in your chart. Interestingly enough Neptune will be re entering the sign of Aries around 2020, therefore the combination of Neptune in Aries will soon be highly relevant again. With Neptune in Aries , Neptune the planet of spirituality is in the first of the signs Aries. Since the sign of Aries is all about new beginnings and a rebirth of ideas, this combination represents a new cycle and blossoming of spiritual ideas and philosophy. The last time Neptune was in Aries was during the time of the American Civil War. There was literally a battle epitomised by the warrior sign Aries over spiritual ideas and values. The clash between the North and South took place over a background of differing values with regards to the morality of slavery and the control of central government. Eventually as Neptune passed through the sign of Aries it left the country in a far different state to when it first entered, Slavery was no longer acceptable and the government had at least nominal control of the whole of the country. People in the coming generation who have Neptune in Aries will believe and take part in a rebirth of spiritual ideas and values. A new generation of leaders with be born and will rise with ideas for easing the suffering of humanity.