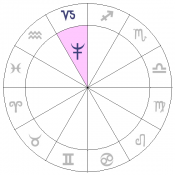 The planet Neptune is in the sign of Capricorn from 1984 to 2000. It's important to note that Neptune takes about 164 years to make a complete cycle, spending about thirteen years in each sign, and therefore the interpretation applies to a generation rather than the individual. For a more individual interpretation you need to look at the house position of Neptune in your chart. Capricorn represents the status quo and existing structures and ways of institution and government. With the passing of Neptune through this sign there would be changes and dissolution of outdated modes of government with ideals of a better future. This would involve removing physical and mental barriers between people with a glimpse that all people are intrinsically connected. Indeed the whole traditional relationship between east and west was thrown into confusion and a new order began with the era of glasnost and the thawing of the traditional icy relations between the superpowers. In 1989 the physical barrier that separated the two blocs was removed and quite soon afterwards the two Germanys became one unified country once again. Neptune dissolves the structures that it touches and gives us a glimpse into the underlying unity in the area it passes through. This is very evident when it passes through the earthly sign of Capricorn. This generation further saw the early signs of the internet revolution which would fully evolve as Neptune passed through the sign of Aquarius. The internet would in time help to remove traditional barriers of distance between people as they communicated instantly in a cyber world. People with Neptune in Capricorn will be a generation who believe in the dissolution and refinement of existing structures of government and the potential unity that can be brought about because of that.