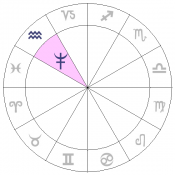 The planet Neptune is in the sign of Aquarius from 1998 and leaves in 2012. It's important to note that Neptune takes about 164 years to make a complete cycle, spending about thirteen years in each sign, and therefore the interpretation applies to a generation rather than the individual. For a more individual interpretation you need to look at the house position of Neptune in your chart. Neptune the planet of the ideal is in the sign of scientific knowledge and understanding, Aquarius. This coincided with the conjunction of Uranus, that was also in Aquarius. During this period there have been great leaps forward in the use of information and technology for the benefit of mankind. People born in this period are a generation who instinctively understand the use of technology and what it can offer in making theirs and other lives better. As Neptune entered Aquarius in 1998 human embryonic stem cells were discovered. These heralded a potential revolution in the way medicine will be practised in the future, with possibly cures for a whole variety of diseases. During this period also the decoding of the human genome was performed with the aid of powerful computers. Cloning was practised on sheep and pigs and other animals. Furthermore the growth of the computer in the home effectively took place during these years. The internet also reached a mass audience with the growth of websites email and blogs. Later as the internet became firmly established, websites to do with social networking flourished. With this came the possibility of unity through technology, as people shared their thoughts and stories from around the world. The ideal of a united human race took one step closer as technology and communication partially removed the physical barriers between people who were separated by vast distances. People born with Neptune in Aquarius are a generation at home with technology and what it has to offer in its ability to connect people together.