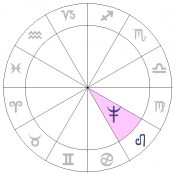 The planet Neptune was in the sign of Leo from 1914 to 1929. It's important to note that Neptune takes about 164 years to make a complete cycle, spending about thirteen years in each sign, and therefore the interpretation applies to a generation rather than the individual. For a more individual interpretation you need to look at the house position of Neptune in your chart. Only a small generation remain alive today with this combination. The early generation of these people were born into the first world war. Where Neptune passes can often indicate great sacrifice for a higher ideal. When it passed through Leo the dreams of the self ,as Leo is concerned with, were extinguished or elevated to a greater cause. A whole generation of young men from all across Europe were lost as they became caught up in world events far greater than themselves. The poetry and romanticism of the individual so often focused on the self were elevated to the pain and sadness of a whole generation of youth sacrificed for king and country during the horrors of the first world war. Where Neptune passes through there can also be great illusion. The dreams of a noble and heroic and quick war were soon replaced with the brutality and length of the task at hand. Even after the war finished Neptune continued the illusion with spiritualists promising relatives they could contact the dead acting as mediums and through the use of séance’s. They were virtually all proved as fakes. Neptune also gave the illusion of quick wealth in the roaring twenties with promises of everyone getting rich through investing in no lose share investments. At the end of this transit through Leo this great illusion was revealed in 1929 with the Wall Street crash and all the suffering that followed it. The generation of Neptune in Leo will therefore be a group who are forced to make a sacrifice of their personal dreams but in the process a higher truth will be revealed to them.