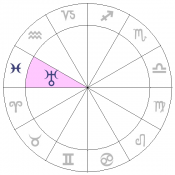 Only the very young or very old of our generation have the combination of Uranus in Pisces. Only within the last few years did the revolutionary planet Uranus enter the sign of spirituality Pisces. The last time we had Uranus in Pisces was in the roaring twenties, which would make most of the older people with this combination as approaching their nineties. Where Uranus is placed is where the people have an ability to change and revolutionise the current way of thinking. With Uranus in Pisces the revolution is in Spirituality. In the twenties this took the form of a rise in Spiritualism and the occult often in an attempt to understand and make contact with the generation that was lost in the great war. Conventional religion could not deal with the great loss and people turned to other forms to assauge their grief. Similar people with Uranus in Pisces will seek spirituality outside of standard religion and will search for their own methods of connecting with the divine. People with this combination may look to create advances in technologies for natural and sustainable energies and green methods of farming which do not harm the earth such as wind, water or solar power. Pisces also represents the past and people with Uranus in Pisces will seek to break free from influences of the past.