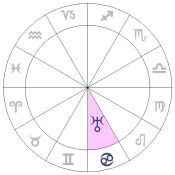 People with Uranus in Cancer are a generation who bring radical change to the traditional home life. The last generation with Uranus in Cancer were born in the early 1950's and were in their teens during the sixties revolution. These people had new ideas about freedom with regard to the traditional family. They were not content with the way things had always been done in the past. They were far more likely to leave home at an early age and generally required extra freedom. Some of the people with this combination would accept radical new ideas with regard to partnership such as single parents bringing up children, gay and lesbian marriages and living together as an extended family such as in a commune. Since Uranus is the planet of revolution and Cancer the sign of the home people with Uranus in Cancer are likely to have unusual homes. This may be the décor or form of art they are drawn too. There will be a tendency to favour the use of new technology around the home. The last generation of people with Uranus in Cancer saw the advent of a whole host of electronic devices around the home to make life easier such as the rise of the washing machine, fridge freezer, hoover and television.